Purple Drains offer fixed prices for blocked drains in London and Kent. Our prices start from £45.00 for a small blockage.

We cover the whole of London, Kent and Essex.

Are you buying a new home and want to check the drains? We offer Drain surveys which are recorded on the latest drain camera. We then provide a full written report on the drainage system. This can save you time and money when purchasing a new home.

If you are having trouble with drain smells, we can provide Camera inspections and Smoke tests.

Our Engineers cover the whole of Kent and London.

Drain unblocking is hardly a pleasant business to be in but this company are so professional and competent. They didn't just unblock the problem with a bit of rodding; they were meticulous and discovered another problem which would have presented itself later and caused us an additional call out fee. In solving this they proved to me that they are a professional outfit in an industry where the majority of their competitors aren't. Highly recommended.

Pleasant experience with this company. Our Outside drain was blocked and was causing the soil pipe to leak internally into our basement. They arrived and cleared the blockage within the hour. Great effort.

I had a blocked drain in maidstone and called Purple Drains to assist. Friendly and efficient. Highly recommended

Telephoned to request Clearing of blockage in Sewerage drain. Was told the operator would be with us with in the hour. Arrived just before the hour was up. Pleasant young man. Got on lifting drain covers. Not easy to my knowledge had not been lifted in years. No moans or groans.Tried to clear blockage and failed. Suspected block age further down the line than could be reached through our manholes. Got permission to lift cover in his garage a BIG heavy cover. Cleared the blockage immediately. First Class service Highly Reccommended

Great Service. Very happy with the workman. Solved the problem in a matter of minutes. Was also very mindful of the current Covid-19 situation.

Pleasant experience with this company. Our Drain became blocked this morning and we decided to call this company. Staff were friendly and reliable. Thanks a million

Had a blocked drain issue which I couldn't handle. I called Purple Drains and the guy on the phone was really helpful. He arranged a Plumber to attend and cleared the blockage. He was very knowledgeable and I would I highly recommend.

Brilliant Service. Arrived within the hour and were exceptionally clean workers. I had an issue with Blocked drains and they knew exactly what to do. If your Outside Drain is blocked, don’t hesitate to call this company.

My husband called Purple Drains when our outside drain was blocked. We managed to book straight away and one of the engineers arrived promptly. The issue was resolved fairly quickly and we have re booked to have them clean our guttering. I would recommend this company for anyone with a blocked drain in Maidstone.

We Called Purple Drains after I discovered I had a blocked drain. After searching tirelessly online for information on how to unblock my drain, I decided to call Purple Drains as they were local to me. They arrived prompt and handled the blockage Stupendously from start to finish. Highly Recommended.

My husband called Purple Drains regarding a blocked outside drain he was having difficulty with. The engineer arrived as promised and cleared the blockage within minutes. Very polite and friendly. We would recommend this company.

Fantastic response from this company. I call them up and the arrival time was less than 30 minutes. The guys who arrived were polite and professional. I would recommend this company. 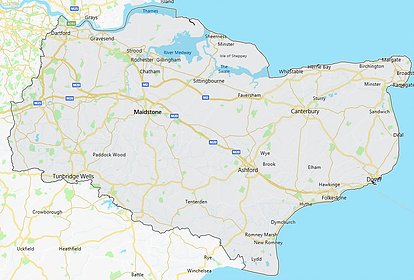 Some of the areas we cover in Kent